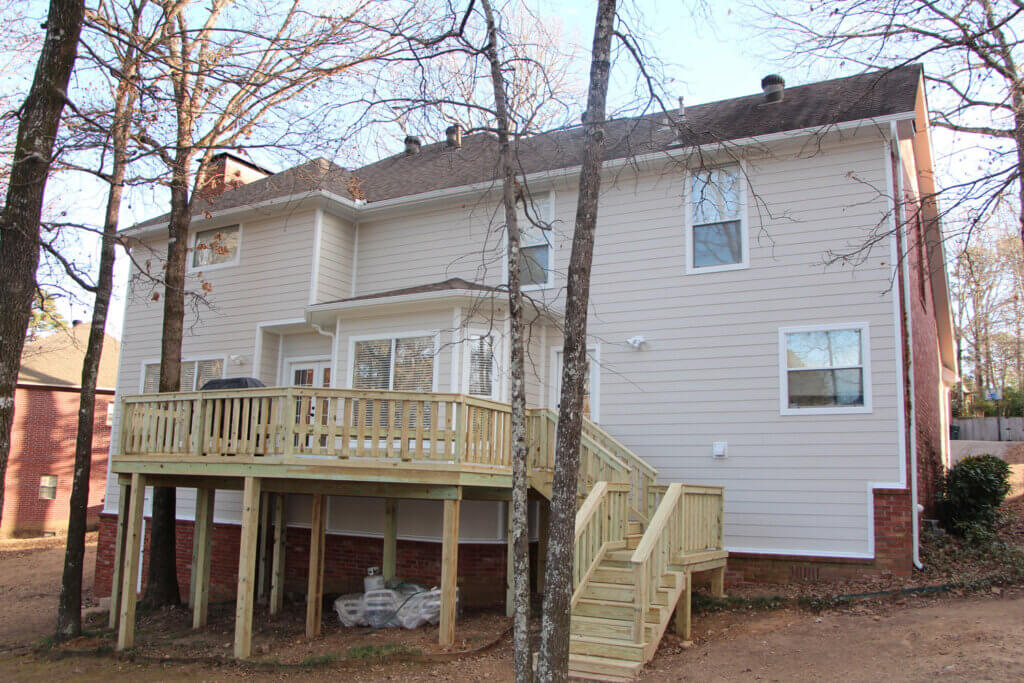 When other contractors gave the owner of this Chenal Valley home information that seemed a bit off, they contacted Sideco, and we handled it from there.
Client: Jim & Ann Pacheco
City: Little Rock
Neighborhood: Chenal

The owners of this Chenal Valley home thought all they needed to do was install new siding. In fact, when they started the process to select their contractor, Sideco was one of three contractors contacted. The others, wanted to install vinyl siding over there existing siding and trim (even though Chenal Valley Architecture review committee does not allow Vinyl Siding anywhere in Chenal). Upon Sideco’s inspection of the home, I became thoroughly convinced that the existing deck was improperly installed with NO ledger flashing. In addition, Sideco suspected substantial moisture damage to the wall assembly. Sideco also deemed the existing deck UNSAFE. Frankly, we see this quite often, but what was most disturbing, was the fact that other Contractors the owner contacted all tried to convince the owner that installing plastic siding directly over the original siding was perfectly fine, and that they were certain there was NO moisture damage to the structure. The pictures speak for themselves.

Our experience with Sideco was excellent from our first visit to their office, right through the project completion. The initial review of the work needed in our property, detected several real issues that no other competitor picked up on. I was kept abreast of project start status regularly, and when the project team arrived they were impressive immediately. Anthony the project manager managed staff, tasks, and deliverables excellently. The staff resembled a sports team in how they communicated, and kept their tasks moving effectively. Each member was more than willing to assist other team members as needed. The numerous questions we had throughout the project were quickly addressed by Anthony. All with either a satisfactory resolution, or thorough explanation. In spite of some bad weather days and a major holiday, the project was completed on schedule. We felt that Sideco always had our best interests in mind. They worked hard to please us, and it showed in the final results.